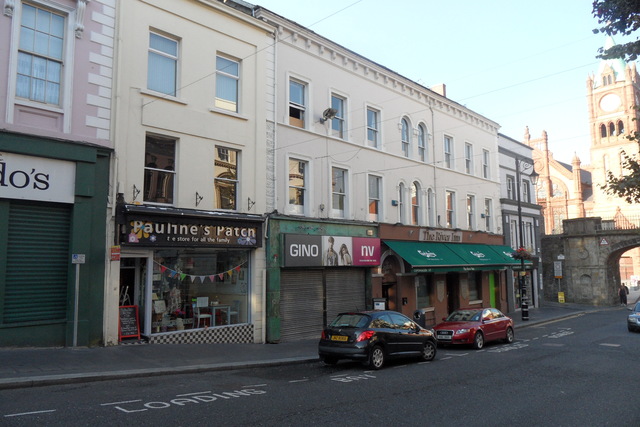 In Londonderry, County Londonderry, the Picture Palace was opened in 1912, a conversion of a grocery shop. It is listed in the 1931 Kine Year Book as having 800 seats and being operated by the Irish Living Picture Company Ltd. It was taken over by Union Cinemas in September 1936, and acquired by Associated British Cinemas(ABC) in October 1937, when that circuit bought Union. By the 1940 Kine Year Book the cinema was listed as the Palace Cinema, leased by Rialto Theatres Ltd. Soon afterwards it was taken over by an independent operator.

In the 1985 British Film Institute Handbook it is listed, now with 580 seats. Certainly by November 1998, when I visited Londonderry, the Palace Cinema had closed and the building was occupied by Gino, a fashion shop.

The Palace opened in 1912 and was a conversion of Black’s grocery shop.