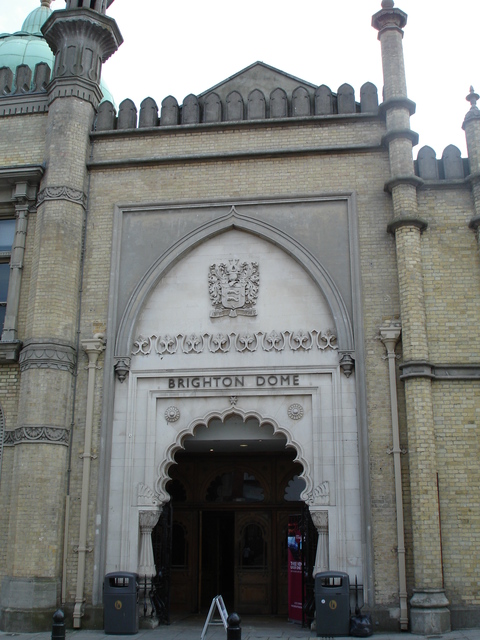 Located in the Pavilion Gardens, and linked to the Historic Grade I Listed Royal Pavilion. The Dome was opened in 1806 and was designed by architect William Purden as opulent riding stables for the Prince Regent. On 24th June 1867 it was converted into the Dome Concert Hall. In 1910 it was equipped with a fireproof projection box. In the 1920’s it was hired out to screen films. On 1st February 1926 the owners of the towns' Duke of York Cinema hired out the Dome to screen an extended run of the film “Livingstone” which was shown twice daily. In 1935 cinema/theatre architect Robert Atkinson remodelled the interior of the building in an Art Deco style. The seating capacity is 2,102 with 500 in the stalls, 798 in the stalls circle and 804 in the balcony. It has 9-dressing rooms. It is equipped with a Hill, Norman & Beard (Christie) 4 manual, 42 ranks concert organ which was installed in 1936. The organ contains a few ‘sound effects’.

Used for concerts, live performances, special events and conferences, one of its claims to fame was the staging of the 1974 Eurovision Song Contest in the Dome when ABBA won representing Sweden with the song “Waterloo”. Many famous artists have appeared here, including Ella Fitzgerald, Count Basie & His Band, Paul Robson, David Bowie, Stevie Wonder, Jimi Hendrix, Pink Floyd, Bette Midler, Nina Simone and many others.

The Dome Brighton is a Grade I Listed building.