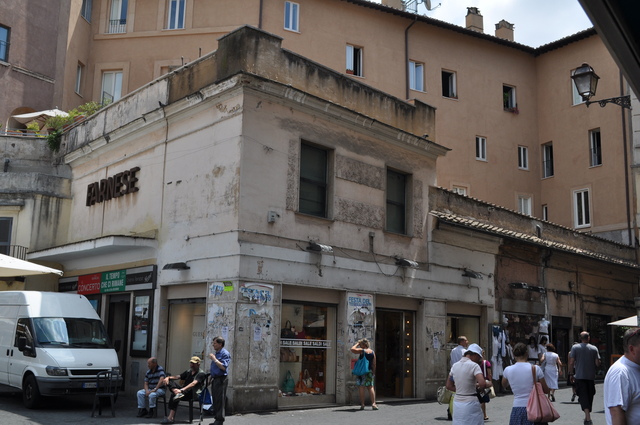 This small neighborhood cinema in Rome’s historic Campo de' Fiori has been open since 1930. It has been a “cinema d'essai” or art house, a first run theatre, a second run theatre.

It has no particular architectural distinctions other than the onubtrusive way it fits into one of Rome’s most likable and distinctive squares, known for its teeming open-air market each morning, its statue of Giordano Bruno, a Dominican monk who in this very square in 1600 was burned at the stake by the Church Inquisition for his “heresies”.

After being closed for a while, the Cinema Farnese is listed as open in June 2008 and has the name ‘Persol’ added to its name, which could be the owners/operator or sponsor.

I just found a fascinating little wallet-size flyer from October, 1970 that was issued by the Farnese. It refers to itself as the “Farnese – petit d'essai”, French for “little art house” and adds “nel cuore della vecchia Roma”—–“in the heart of old Rome.” The flyer asserts that the cinema was at the time aligned with AIACE, Associazione Italiana del Cinema d'Essai or Italian Association of Art Cinemas. Upcoming series planned for the cinema were listed. Among them were: Aspects of Italian cinema of yesterday and today (15 films), Power and repression in the trilogy of M. Jancso (3 films), Some problems of South America (3 films), Homage to Akira Kurosawa (3 films) Swedish Cinema Week (7 films). Admission prices were 300 liras (general), 200 liras (AIACE members) or from 30 to 50 cents, from what I can remember of exchange rates at the time.

Can any Roman film buffs or others acquainted with the history of this interesting theatre in its magnificent historic location provide further information?

Here is a recent photo of the Cinema Farnese. It is currently shuttered, and a sign on the front tells of the conflicting interests of developers who wasnt to convert it to ther uses and those who want to maintain this now historic venue as an entertainment site. The Rome newspaper still lists the theatre daily with the phrase “prossima riapertura” or “soon to re-open.” But it doesn’t seem so.
View link

A photograph of the Cinema Farnese in early 2008. The facade has since been smartened up, under new owners:
http://flickr.com/photos/aaronbrame/2443707229/

On May 18, 1940 the Farnese was running a fine double bill of then-current Italian films: “Il ponte dei sospiri” with Erminio Spalla and “Manon Lescaut” with Alida Valli, plus a LUCE short. Per Il Messaggero listings.