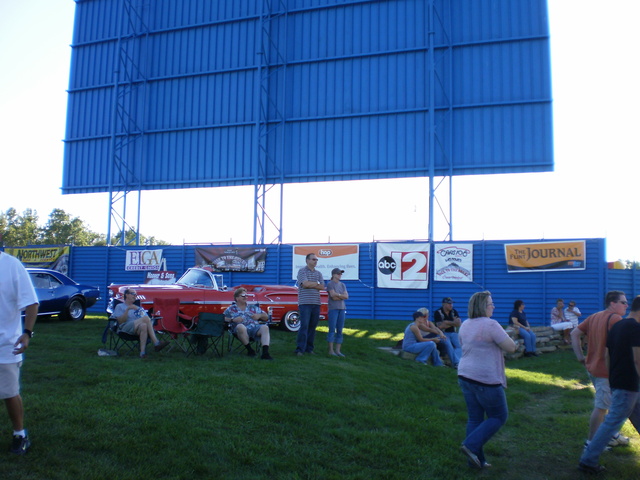 The U.S. 23 Twin Drive-In was opened on June 15, 1951 with Chester Lauck in “Dreaming Out Loud” & Boris Karloff in “The Fatal Hour” & Roy Rogers in “Trail of Robin Hood”. It initially was a single screen with a car capacity for 1,250 on its 25 acre site. The screen tower had a 5-room apartment for the manager, and in front of the screen tower was a childrens' playground with swings, slides, a merry-go-round and a water tank motor boat ride. The U.S. 23 Drive-In was designed & built by Frank Boomer, and was owned and operated by Louis Warrington and Lee Stallard.

It is now the only drive-in in Mundy Township, a rarity in a country with only 800 remaining drive-ins.

1956, it was co-owned by Stallard and Warrington.

Description’s inaccurate now. This was always the only DI in Mundy Township. For a long time, Flint did have two DI’s (the Miracle Twin being the other) but it wasn’t even close nearby. 23 is now the only one left.

Cinema Treasures has uploaded a TV commercial for this drive in. http://cinematreasures.org/video/us-23-drive-in-theater

Nice ad video, steelbeard1! As great as that sign looks, it’s ever better with the arrow in motion.

TenPoundHammer, the 1949-50 Theatre Catalog already listed two Flint drive-ins. The Corunna West Side had an address of M-21, and the Dort East Side was on Dort Highway. Each had a capacity of 775 and was run by W. M. Rice.

There were four Flint drive-ins listed in the 1959 IMPA – Eastside (Dort?), Westside (Corunna?), Northland, and US 23. With a few name changes that foursome continued through the 1976 edition.

By the 1982 IMPA, those four were joined by the Miracle Red & Blue. All five survived through the last IMPA drive-in list in 1988.

At WaterWinterWonderland, there’s a 2003 comment by “Cinema Treasures” (hmm), saying, “The second 38 x 76 screen was assembled in 1986 using parts from a dismanted (sic) drive in screen tower, which originally measured 60 x 120, fabricated by Selby Industries. The original wood screen tower was destroyed in a 1997 arson fire and was replaced that year with the remaining parts from the aforementioned screen tower. As a result of the fire, a planned third screen will not be built.”