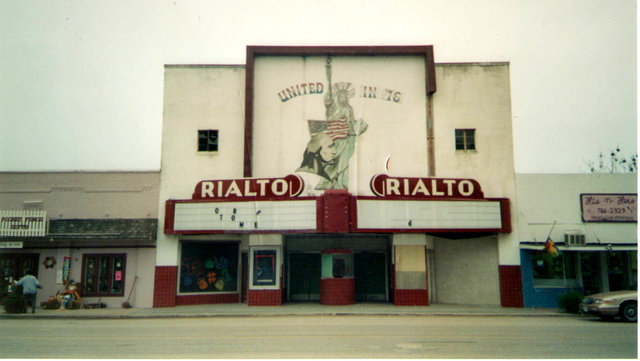 Another Hall Industries Theaters. I believe there were seven. This one opened on May 14, 1948. It was still open in the early-2010’s, and they were selling the old seats to make money for renovations.

The page needs updating. The Rialto has two screens.

Looks in good shape here, and 2 screens too. Will get some updated photos next time I pass through. Was open a couple of weeks ago.

According to the May 8, 1948, issue of Boxoffice magazine, the Rialto at Three Rivers was expected to open within 30 days. The house had been designed for the Hall circuit by architect Jack Corgan.

Here’s a newspaper article about the Three Rivers Rialto.

Two different Rialto Theatres are conflated on this page, and I think it’s partly because Google Maps has the addresses for Thornton Street totally screwed up. 106 W. Thornton was probably the address of the original Rialto, built in the 1920s and closed in 1948 when the new Rialto opened. It also probably had the 260 seats. The 1948 Rialto is at 613 E. Thornton, but good luck getting Google to realize that.

Boxoffice of May 29, 1948, reported that Hall Industries had opened their new Rialto at Three Rivers on May 14. The 800-seat house featured a section of stadium seating and charged an admission price of 44 cents.

This web page from the Live Oak County Historical Commission has a history of this Rialto, and also a few lines about Three Rivers' original Rialto. Hall Industries had also operated the first Rialto.

Hall Industries closed the second Rialto in 1981, and it remained dark until 2001, after it was acquired and restored by the Economic Development Corporation of Three Rivers. The most recent operator, Virginia Herring, closed the house in 2020 due to the coronavirus pandemic, and decided not to renew her lease when it was up in July that year. I don’t know if the EDC has found another lessee yet, but none of the cinema web sites currently list any showtimes for the Rialto. This could be a good opportunity for someone who wants to run a vintage movie theater in a small town. It would be a shame if the place doesn’t get reopened.

The new Rialto Theatre launched May 14, 1948 to a capacity crowd with Henry W, Hall of Hall Industry Theatres Circuit on hand.